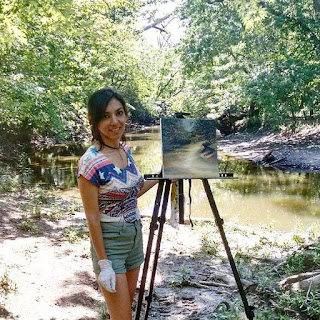 I am an Ecuadorian painter who grew up in New York. Growing up in an artistic family helped inspire my creativity. I studied studio art with a specialization in drawing and painting from Loyola University Chicago. I currently reside in Boston, MA with my high school sweetheart and my loving son. My works have been enjoyed by collectors all over the world and I've been honored to be featured on People and published on the Parent Resource Book for Cognitive Behavioral Intervention for Trauma in Schools. I have exhibited my work throughout the country in states such as Newbury Street, Boston, Chicago, IL, Tallahassee, Florida, and New York.

Popular posts from this blog 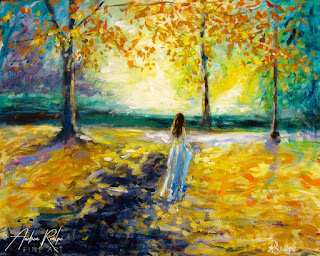 Happy first day of autumn! Autumn is a second spring when every leaf is a flower. - Albert Camus
Read more 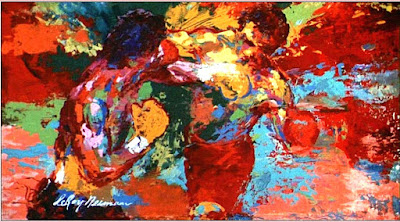 I received a request to paint a colorful expressionistic painting of Rocky vs Apollo by Leroy Neiman. The painting is shown at the end of the film, Rocky III when Rocky and Apollo have a friendly boxing match and the fighters freeze into the colorful Leroy Neiman painting.

The style of painting is something that I have not tried before so I was ready for the challenge! As soon as I was commissioned to make this painting, I pictured the technique that I would use to paint this image. Since this painting has a lot of motion I thought a pallet knife would certainly capture it.
I started by mixing the most prominent colors in the painting. The painting is full of various shades of red. I mixed cadmium red with phthalo green to get a darker shade of red. I mixed cadmium red with cadmium yellow and so on.. Colors upon colors were certainly needed. The color mixing took about an hour before I put paint on the large 30 x 40 inch stretched canvas. I also sketched out the scene so I can get the …
Read more

This is my first blog entry, I am very excited to start this blog about myself and my art work. Welcome to my blog and enjoy. :O)
How to Draw Realistic Pencil Drawings
~Step 1: Pick out a clear detailed photograph. Chose wisely, no blurry images. Your final drawing results will be very gratifying depending on the quality of the original photograph.

~Step 2: Draw an outline with 2H pencil. Draw it lightly so that if you make a mistake you can erase easily.

~Step 3: This is the fun part. Now you really have to look at the photograph. For example, with a rose pedal, notice every vain on the rose. Notice every flaw of the rose, the more you notice the more realistic your drawing will be.
Start with the left corner of the page, so you do not smudge the graphite. You can also put a plain white paper on the section you are not using. When I do pencil portraits, I start with the pupal of the eye and work my way out.
~Work very slow; do not speed. Work an hour an inch, that is how you get the…
Read more